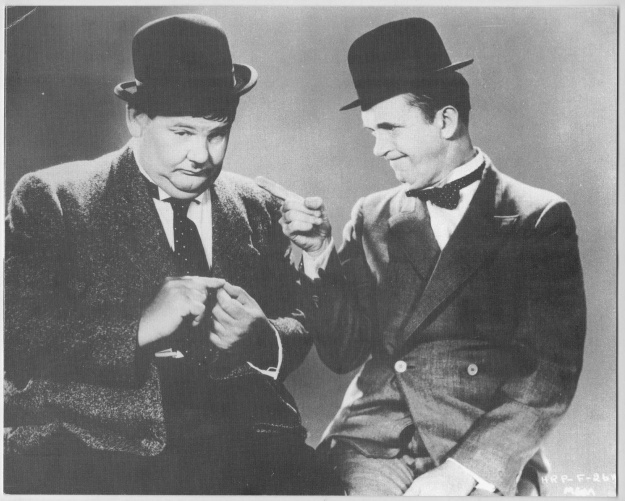 Millions of people around the world worship not one God, but two. Instead of going to church they convene in ‘tents’ to worship their joint deities, perhaps wearing bowler hats and fiddling coyly with their ties. Devotees of Laurel & Hardy can also be found evangelising on the internet and trying to convert a new generation to their comic genius, and they can call on some literary heavyweights for support: J.D. Salinger described them as ‘two heaven-sent artists and men’; to Kurt Vonnegut they were ‘two angels of my time.’

When I was growing up the BBC frequently screened the Hal Roach-produced 20 minute shorts (two-reelers) from Laurel & Hardy’s golden age, 1929-1940. In them, Depression era Los Angeles is depicted as a savage world full of violent criminals, hard-bitten dames, nasty neighbours and spiteful wives. By contrast, Stan and Ollie, though at times supremely gormless and ridiculously pompous, were always kind to children and animals and they stood up for justice in a heartless world. When it comes to getting their own back on those who do them wrong, they are not prepared to turn the other cheek. This leads to some magnificently creative acts of revenge in films such as Big Business (1929), Them Thar Hills (1934) and Tit for Tat (1935).

Although much of this monochrome mayhem could be considered slapstick, it is of a different ilk to the frenetic pratfalling of, say, the Keystone Cops a decade earlier. Timing is of the essence in a Laurel & Hardy short: what we get is slow-burning, unhurried destruction and indignity. The characters, having meted out an eye-poke or an Adams-apple-flick, wait patiently for their adversary’s reply. It is beautifully choreographed and the anticipation is delicious.

Stan and Ollie started making films together during the silent era in 1927, using the same team of Hal Roach as producer/director/ideas man and H.M. Walker as titles-writer. When sound arrived Walker emerged as a writer of inspired dialogue and the verbal exchanges between ‘the boys’ quickly vied with the knockabout stuff when it came to getting laughs. It is a tribute to the quality of the writing that phrases such as ‘another fine mess’ have become part of the Western lexicon. My brothers and I still quote lines at each other: “why don’t you do something to help me?”, “I’m not as stupid as you look,” “boiled eggs and nuts, hmmm!” or “a steaming hot pot of cor-fee.” When Stan is asked by a detective where he was on the night of a murder, he stares into space and counts on his fingers, “Septober, Octember, Nowonder …”

Although it was Stan Laurel who worked hardest behind the scenes to bring these films to vivid life, it is always Ollie who commands our loyalty most fiercely, for he is the optimistic soul who yearns for order, symmetry and beauty in his world. It is on him that the camera lingers most, registering a fascinating repertoire of close-up expressions: his eyes speak to us directly of his despair, frustration, stoicism and befuddlement. The effect is both hilarious and heart-rending. Ollie is built like a barrel, yet his movements are delicate and graceful. A fan on the internet writes about his ‘wonderfully trilling, baroquely embroidered finger gestures.’ Nobody rings a doorbell or lays the table or plays the piano quite like Ollie.

But why divide them? Laurel & Hardy are the great odd-couple double-act. They complement each other like a long-married couple, lost without their other half. Ollie bemoans Stan’s stupidity and Stan suffers Ollie’s bossiness, but they are yoked together, for better or worse.

As Buzz Lightyear says in Toy Story, if you can’t fly, then at least you can ‘fall with style’. Stan and Ollie are always falling with style, and by doing so they make our spirits soar.