Wind River is sometimes hard to watch, but this bleak and brutal crime thriller features strong performances, character depth and an intelligent script with a serious message: that the lawless frontier of the old Wild West lingers on and its Native American Indians are still treated as second-class citizens. 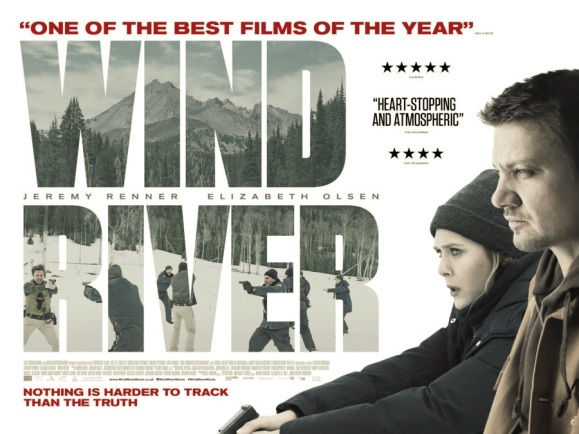 The film is ‘inspired by actual events’ in its’ dramatisation of an horrific crime committed in a bleak outpost of snowy Wyoming. It completes a trilogy of films written by Taylor Sheridan, in which he highlights issues of social injustice in the United States. After Sicario (the war on drugs) and Hell or High Water (rural poverty), Sheridan’s directorial debut is concerned with the plight of Native American women, who, according to The New York Times, are raped and sexually assaulted at a rate four times the national average. They are also 10 times as likely to be murdered than other Americans.

The film concludes with a chilling quote: ‘While missing person statistics are compiled for every other demographic, none exist for Native American women. No one knows how many are missing.’

Wind River opens with a dreamlike scene: a girl running barefoot in the snow, moonlit mountains in the background, with a voice incanting what sounds like Native American poetry: ‘the tree stands tall and grand’. Cut to a wolf circling sheep before it is despatched by a camouflaged hunter (Jeremy Renner). The frozen corpse of the girl, Natalie (Kelsey Asbille) is later found by the hunter, wildlife officer Cory Lambert, who teams up with FBI agent Jane Banner (Elizabeth Olsen) to track down her killers. 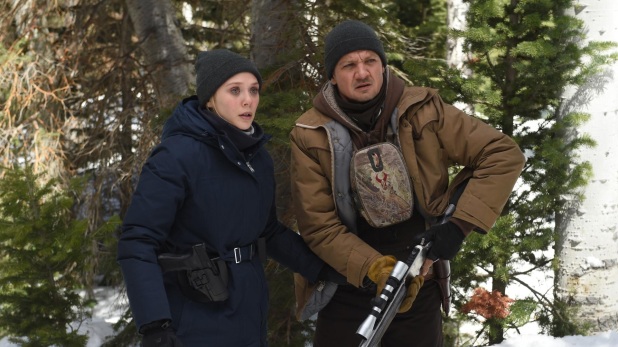 Rugged, stoic and compassionate Native American Lambert has personal motivation for justice and vengeance: he knew Natalie, and three years previously his teenage daughter had died in similar circumstances and he still doesn’t know exactly what happened.

The investigation takes them to the Wind River reservation, with its drug casualties, ‘snow and silence’. City girl Banner is unprepared for the inhospitable Wyoming weather: ‘didn’t you guys get the memo? It’s spring’. There is fish-out-of-water humour here and dry repartee from the Tribal Chief (Graham Greene), who provides some much-needed light relief. ‘This isn’t the land of back-up,’ he tells Banner, ‘this is the land of you’re on your own’. 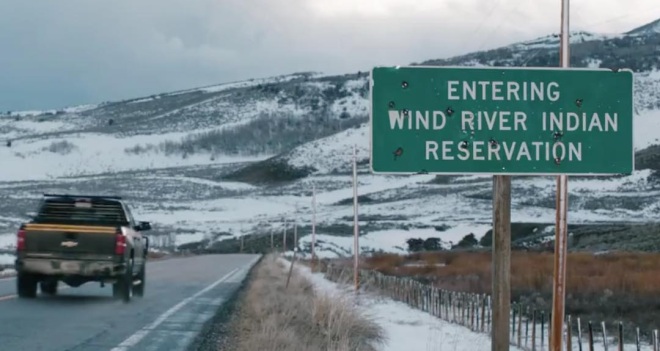 Overall, though, Wind River is infused with sorrow. You can hear it in regular collaborators Nick Cave and Warren Ellis’s creaky fiddle and untuned piano score. It is a talky film, as if the characters are trying to fill the oppressive silence. They talk through their issues of bereavement, injustice and frustration and try to come to terms with ‘this land – it’s all we have’.

Cinematographer Ben Richardson does not make Wyoming into picture-postcard decoration. At times the snow-topped peaks look like a Bond film, but more often the landscape looks austere and bare, unforgiving of man’s attempt to forge a life here. As Lambert says, ‘luck doesn’t live out here, it lives in the city. Out here, you have to survive or surrender’.

When violence eventually explodes onto the screen with a flashback to the crime, it is horrific and disturbing, as if we have been transported into a different film. But Sheridan’s attention to character depth and fine performances from the cast ensure that, ultimately, we are moved and forced to confront the issues that are highlighted.