Laughter is in short supply, along with everything else (food, love, civilisation), in this bleak Australian post-apocalyptic western. The Rover doesn’t offer much in the way of humour or hope, but it has memorable performances from (Ely-born) Guy Pearce and Robert Pattinson. With its mixture of casual violence, drily dull dialogue and odd-couple existentialism, it’s like Tarantino directing a Pinter screenplay.

Writer-director David Michôd’s film opens with the words ‘Australia. Ten years after the collapse’. We are not told whether this is an economic or war-related crash, but the Aussie outback in The Rover has a Mad Max End of the World feel to it. Guy Pearce walks into what looks like a saloon bar. He has the inscrutable cool of the loner, The Man with No Name, but he sure ain’t no Clint in his khaki shorts and scuffed trainers. With his unkempt beard and hair, he is, though, strangely reminiscent of Eli Wallach in The Good, the Bad and the Ugly. IMDB says he’s called Eric.

When three men steal Eric’s car, he is hell bent on getting it back. He eventually teams up with Rey (Robert Pattinson), who has been left for dead at the scene of a crime – abandoned by this brother, one of the trio. On their road-trip the odd-couple grope towards some kind of friendship. Rey is a twitchy hillbilly halfwit, with a vulnerable sweetness about him. Eric is mostly silent, haunted by loss. They both kill a lot of people. 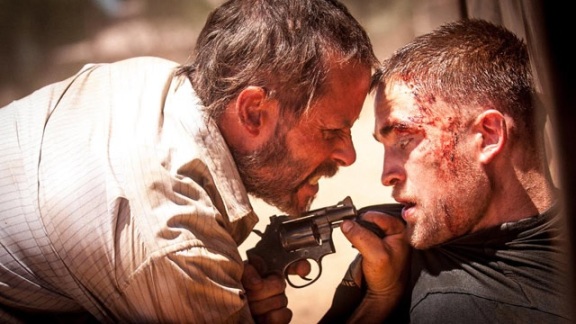 Violence is meted out casually, just another fact of life in this bleak world. People don’t even feel strongly enough to hate, it seems. Survival is all, though Pearce’s face brilliantly conveys Eric’s struggle to continue living, when everything is ‘over’. There is nothing in the way of modern consumer culture here. The saloon at the start is self-service, with no fancy drinks, only warm water out of a bucket.

In the parched, dessicated landscape of the film – all bleached-out yellow-brown and sage-greys – we drink down thirstily any scraps of humanity that are thrown to us. There is one saintly character, a doctor (Susan Prior), who has cages of rescued dogs, panting in the heat. She can’t let them loose, in case they’re eaten for food – just one sign of times, along with the crucified bodies on the roadside and the armed guards on the freight train.

There is as a welcome moment of lightness when Rey sings along to a Japanese pop song on the car stereo. Elsewhere, the atmospheric soundtrack features creaky violins, as dried up as the outback. There are discordant drones and percussion, as if played on instruments made from junk, all ‘proper’ ones having presumably perished during the ‘collapse’.

It might sound depressing and grim, but The Rover is strangely hypnotic. It is admirable in its refusal to play by commercial rules and consistently stays true to its vision. The film’s characters do not suddenly become ‘moral’ or ‘nice’. They refuse to make you feel better by being ‘quirky’ or blackly comic.

Perhaps the nearest thing to a Coen Brothers-type caricature is ‘Grandma,’ madam of the opium den/brothel. She knits, listens to 40’s radio tunes and tells Eric: ‘you must really love that car, darling. What a thing to get worked up about in this day and age.’

Stay with The Rover until after its bloody climax, and you’ll get to find out just why Eric was so keen to get his car back.