This claustrophobic black and white psychological drama is a wild and salty cinematic treat. Set on a God-forsaken rock off the coast of 1890s Maine, it shines a light on the stormy relationship between two newly-stationed ‘wickies’ (or lighthouse keepers), as they try to survive being cooped up together for five weeks. Writer-director Robert Eggers, whose eerie debut The Witch (2015) was so atmospheric, uses these limitations to his advantage, ramping up tension through sound and shadow. By the end, with mental and physical storms raging, the camera is also climbing the walls.

From the start The Lighthouse is unusual. Apart from the lack of colour, we notice that the screen size is more like the old TV ratio, boxed in like its warring characters. Out of a blank sepia sea there gradually appears the shape of an approaching ship. To the sound of shrieking gulls and foghorn blasts two men row ashore, then they stand next to each other, staring into the camera for what seems like a long time, as if they were posing for a Victorian photograph.

They are grizzled old sea-dog Thomas Wake (Willem Defoe) and the younger Ephraim Winslow (Robert Pattinson), already owner of an exhausted thousand-yard stare and, we later learn, a murky past. As the two men unpack in their cramped attic bedroom they remain silent except for the exchange of a couple of farts and whistles, a gentle prelude to the buffeting winds ahead.

The dynamic between them is quickly established over one of many gas-lit meals. Wake dominates, rambling on like Captain Ahab in a kind of Old Testament West Country burr, his words a briny broth of maritime myths and allusions. ‘You do as I say,’ he tells the reserved Winslow, making him do the menial jobs like shovelling the coal and emptying the pisspots. 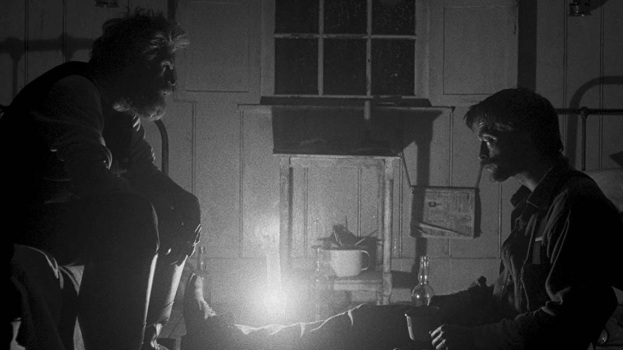 The main bone of contention between them becomes the ‘lantern’, which Wake mysteriously refuses to let the other man tend. ‘The light is mine,’ he says, locking the trapdoor so that other man cannot climb up to the top to even look at it. When Winslow does climb the spiral staircase to spy on Wake, he sees him stripped to the waist as if he is sunbathing. We hear him talking to someone. Slime slithers through the grill of the metal floor and we glimpse a monstrous tentacle or tail.

As both men start to lose their grip on sanity Eggers expertly orchestrates the action and dialogue, so there is no danger of theatricality. We get squalls of black comedy that could have been written by Beckett or Pinter after reading Moby Dick, but these are mixed with the surreal – disturbing visions of Neptune, mermaids and sea-creatures.

One of the script’s blackly-comic highlights (co-written by Eggers’ brother, Mac) is a drunken argument about Wake’s cooking, in which he turns into Neptune to deliver an epic fire-and-brimstone curse on the younger man. After a pause, Winslow says, ‘alright, have it your way. I like your cooking.’ Elsewhere, they repeatedly say ‘what?’ to each other, in what should be ridiculous pre-fight banter, but ends up funny and natural. The two actors push each other into memorably unhinged, elemental performances which seem more like an organic response to the challenging conditions they found themselves working in. 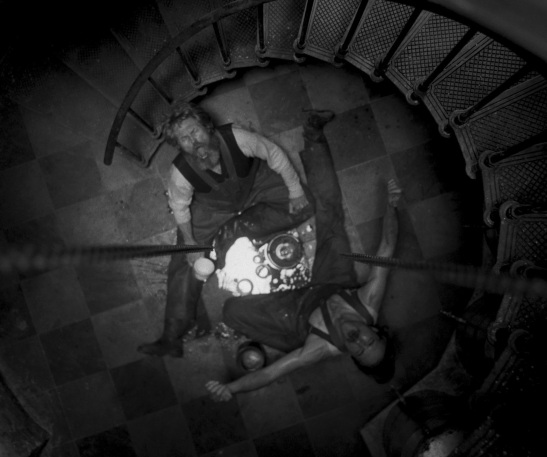 With the rock’s hostile seagull, there is an echo of Hitchcock’s The Birds here. Something about the surreal atmosphere of this monochrome fiIm also made me think of Bunuel’s 1929 classic Un Chien Andalou (close-up of a wooden carving found in Winslow’s pillow) and David Lynch’s Eraserhead (1977).