German Expressionist masterpiece of the silent era, The Cabinet of Dr. Caligari, has been described as the first horror film. Nearly a century after it was made, it remains unsettling and fascinating. Thanks to a two-year digital restoration project, modern audiences can now appreciate its vivid faces and artistic sets in fresh cinematic clarity. 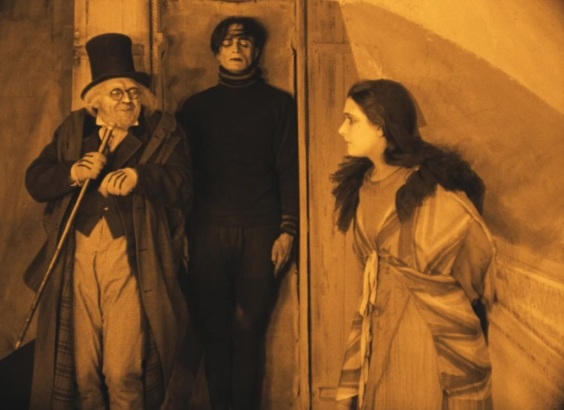 The Cabinet of Dr. Caligari was ground-breaking in many ways. It features one of the earliest examples of a ‘frame story’, in which most of the plot is presented as a flashback told by the main character. Stylised sets – which included models of abstract, jagged buildings, painted shadows, and cut-out trees – were an attempt to show the psychological disturbance suffered by the film’s characters. Caligari also has a satisfyingly dark ‘twist’ ending, an innovation in 1920.

At the start of the film Francis (Friedrich Fehér) is sitting on a park bench chatting to a companion, when a seemingly distracted woman, Jane (Lil Dagover), passes by. Francis calls her his ‘fiancée’, and begins to narrate a tale of the horrors that they have both endured at the hands of a man called Doctor Caligari.

We witness Francis’s visit to a local fair with his friend Alan where they watch the act of Dr Caligari (Werner Krauss) and the panda-eyed somnambulist Cesare (Conrad Veidt) ‘who has slept for 23 years but will tonight wake from his dream-like trance’. The only time Cesare speaks is to tell the audience their fortune. He ‘knows the past and sees the future’ and when Alan asks ‘how long will I live?’ he is told: ‘to the break of dawn’. At night Cesare is woken by Caligari to do his dastardly bidding, and so begins a series of shadowy murders and abductions, which lead to paranoia and mental unravelling. 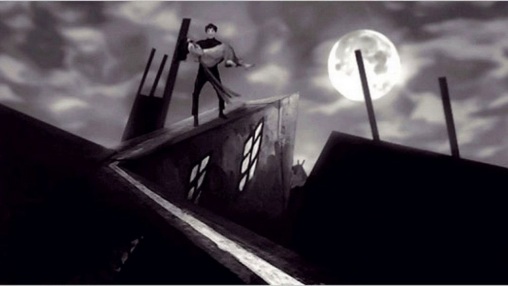 In the Silent world of dramatic expression and gesture, Werner Krauss is riveting as Doctor Caligari. Sinister and goggle-eyed, he pulls splendidly grotesque faces, sometimes reminiscent of Father Jack from Father Ted. When he unveils a life-sized painting of his sleep-walker, a poster to advertise his act, Cesare’s sunken cheeks look like Munch’s figure in The Scream. 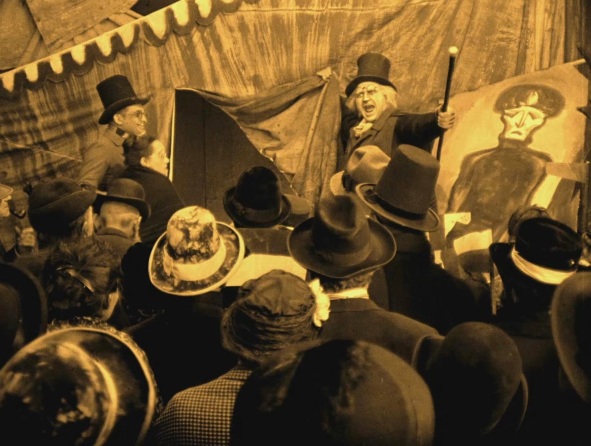 Modern viewers might find this ‘horror’ film lame, this ‘psychological thriller’ less than thrilling. But there are so many aspects of Caligari to enjoy, beyond any conventional genre criteria. The hand-written titles are works of art in themselves – dagger-shaped glow-in-the-dark green letters, over ‘broken glass’ backgrounds. In this off-kilter world, it’s fun to play ‘spot the weird’– an outsize polka-dot bowtie here, a Dali-esque chaise longue there; bent lamp-posts, pointy hats and a crazy-paving mosaic of a village that clearly influenced Walt Disney’s design for his Night on Bald Mountain section in Fantasia.

You also notice the colour changes for various scenes – sepia-tinted for ‘normal’, blue-green at night, pinkish for Jane’s bedroom. This tinting of the film was one of the most striking changes effected by the new digital cinema quality (4K) restoration by Germany’s Friedrich Wilhelm Murnau Foundation. Restorer Anke Wilkening got rid of scratches and dirt from the film’s negative and added hundreds of missing frames, so that the new version is ‘a quantum leap’ ahead of previous attempts at restoration and remastering. ‘We have all the details in the frames,’ she says, ‘all the shades of grey, all the detail in the faces.’ The Cabinet of Dr. Caligari no longer looks like ‘a dusty old film.’