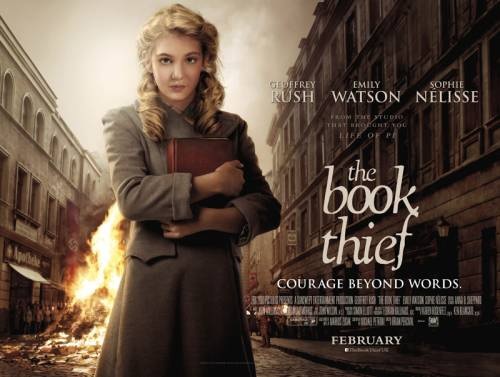 In this disappointingly sanitised adaptation of Markus Zusak’s bestselling novel a brave young girl arrives in Munich in 1938 and survives the horrors of Nazi Germany and World War II. Through the power of books and words she saves a young Jew’s life and becomes a writer.

The Book Thief is narrated by Death, voiced by the wonderfully urbane Roger Allam, who cheerfully tells us at the start ‘one small fact: you are going to die’. He is interested in Liesel Meminger (played by 11 year old Canadian Sophie Nélisse), on her way to live with foster parents after her communist mother has been taken away and her younger brother has died suddenly.

Rosa Hubermann (Emily Watson) welcomes Liesel by bemoaning the loss of income this represents (one child, instead of two) and observing the truth that communists are indeed ‘dirty and filthy’. This is puzzling to us, because Liesel looks immaculate. Everyone and everything in this film looks clean and tidy: clothes are straight from the Costume Drama wardrobe.

Hans teaches Liesel to read in their basement, where he has created a large chalked dictionary on the walls. After Kristellnacht there is a Nazi parade and book-burning. Liesel is ordered to throw a book on the bonfire, which she does reluctantly, but later returns to rescue The Invisible Man by H.G. Wells.

When a sick young Jewish man, Max, arrives at the door clutching Mein Kampf, he is taken in by Hans, who fought with Max’s father in World War I and owes him his life. War is declared on Germany and the family hide Max in their basement. He asks Liesel to describe the day outside, inspiring her to become more creative: ‘cloudy’ becomes ‘the sun looks like a silver oyster’. ‘Thank you,’ says Max. ‘I saw that.’

As they sing Christmas carols to Hans’s accordion, we sense that this will be the last of the good times they have together. Max gives Liesel a present – his copy of Mein Kampf with its pages painted out (‘blank pages for you to fill’). He has written the Hebrew word for LIFE on the title page: ‘words are life, Liesel.’ When Max becomes seriously ill and falls into a coma, she reads to him, first The Invisible Man, and then other books ‘borrowed’ from the Burgomaster’s house library. It is her voice and words that help him recover.

As Liesel, Sophie Nelisse has a lovely face, but her big blue eyes struggle to convey the complex feelings the film’s events require. It is left to John Williams’ Hollywood-by-numbers musical score to try to pull the heartstrings of the audience – melancholy ripples on the piano, swelling strings. However, there are no memorable tunes and the whole film remains curiously stilted and flat.

Director Brian Percival worked for two years on Downton Abbey and it shows. The Book Thief comes across as a cosy, slow-paced, sentimental Sunday evening TV drama. For such harrowing subject matter, cinema requires bite and catharsis, but, despite the excellent Geoffrey Rush and Emily Watson, we are left feeling disappointed. Death has lost its sting.