Quentin Tarantino’s ninth film is a lovingly-crafted comedy-drama which recreates 1969 Hollywood at a time when the hippie dream had turned sour and crazy-eyed Charles Manson and his Family lurked around the corner. As ever, the writer-director gives us a sweetshop of period eye-candy and musical treats to savour, a believably authentic magical history tour of the times. And he doesn’t let the truth get in the way of a good bloodbath.

Above all, it is the first-time pairing of Leonardo DiCaprio and Brad Pitt that really strikes gold. As aging TV star, Rick Dalton, and his stunt double, Cliff Booth, the two Hollywood A-listers are an onscreen joy – funny, moving and richly human – the best handsome/charming leading man double-act since Newman and Redford.

The film opens with a black and white TV trailer for Bounty Law, the western series that made Dalton famous. It is followed by an interview with him and Cliff, in which the stuntman describes his job as “carrying his load”.  We learn later that war hero Booth is now more like a driver and gopher. He lives in a trailer in the shadow of a drive-in theatre with his pitbull terrier, Brandy.

By contrast, Rick has a mansion and swimming pool on Cielo Drive; he swigs cocktails from a Bavarian tankard and talks along to tapes of his old films when he needs his ego boosting. Fearing that he is a ‘has-been’, Rick is an insecure drunk, prone to stuttering, forgetting his lines and crying on his buddy’s shoulder. But the pair seem to have a solid bond – “more than a brother, less than a wife.”

When new hotshot director Roman Polanski (Rafal Zawierucha) moves in next door with his wife, Sharon Tate (Margot Robbie), and Cliff has a run-in with the Manson family at their ranch, we expect events to unfold towards a historically-correct gory climax. But as the clock counts down on August 8th, 1969, Tarantino wrong-foots his audience with an alternative violent ending, one that is brutal, hysterical and horribly funny. 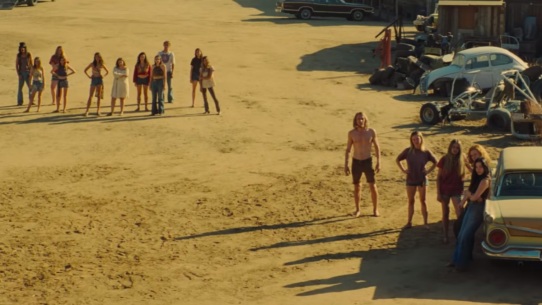 Standout scenes include a masterful homage to a scene in Hitchcock’s Psycho and a comic argument/fight between Cliff and martial arts legend Bruce Lee (Mike Moh), who is controversially portrayed as an prissily arrogant upstart: “I unleash all my power,” he declares, boasting that if he had a fight against Cassius Clay, he would “make him a cripple.”

Like many of Tarantino’s films, Once Upon a Time in Hollywood goes on a bit too long, but this is cinema to immerse yourself in. It never grates or bores. It would be hard to think of scenes which could be cut here. Perhaps Tate’s trip to the cinema to see her own film, The Wrecking Crew? Or Rick’s on-set exchanges with a precocious child actor (Julia Butters)? But these scenes humanize the characters and give them depth. ‘Barbie doll’ Tate is shown watching the audience’s response to her ‘klutz’ role, uncertain at first, then laughing along with their laughter. Rick bares his sentimental soul to his younger, wiser co-star and she boosts his fragile confidence.

I left the cinema feeling strangely invigorated and refreshed. Quentin Tarantino has created another slow-burn classic, a film whose verve and ambience stay with you long after the credits roll. If you go and see Once Upon a Time in Hollywood at a Picture House cinema, you will get a pre-film thank-you from Mr. Tarantino himself. And he rewards viewers who stay beyond the credits with more fun.