Timothy Spall is unforgettable in Mike Leigh’s Mr. Turner, a portrait of the great British painter, J. M. W. Turner, in the last quarter century of his life. He is ably supported by a cast of Leigh favourites (Lesley Manville, Ruth Sheen) and familiar faces from television drama. The film makes you want to visit the National Gallery and learn more about Turner’s work. But the man behind the masterpieces remains a mystery and, without much in the way of pace or dramatic tension, Mr. Turner sometimes feels meandering and flat.

Spall plays Turner as a mass of contradictions: a gruff, hurrumphing, pig of a man, who is capable of extraordinary sensitivity; a man who has a tender, loving relationship with his father, yet disowns his illegitimate children and treats his loyal housekeeper like the prostitutes he visits; tight-fisted, yet generous with his talent and advice to fellow painters, many of who adore him. When a millionaire offers to buy his entire oeuvre for £100,000, he chooses instead to bequeath it to the British nation, so the public can see his work free of charge. 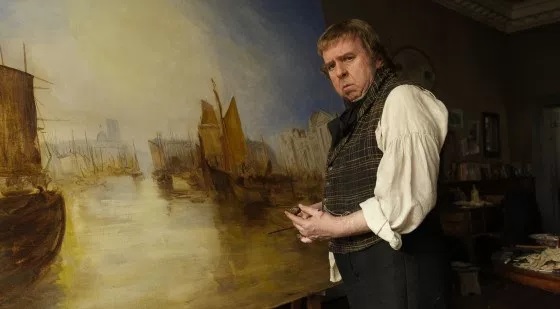 In preparation for the role Leigh told Spall to learn how to paint, so he worked through ‘a whole old-fashioned fine art course,’ copying a full-scale version of Turner’s Snow Storm in oil. In the film the actor attacks his canvases with gusto, jabbing and spitting at them or blowing powdered paint. The artist’s real-life research was even more impressive: we see Turner lashed to a ship’s mast on a stormy sea, up in the crow’s nest during a snowstorm.

One of the most impressive scenes is at the Royal Academy of Art, its lofty gallery walls lined with paintings and works-in-progress. ‘A splendid cornocopia’ says Turner, striding in to greet his contemporaries – John Constable, George Jones, Sir John Soane and other luminaries of the art world. On impulse, Turner dabs a red blob on his finished seascape, upsetting Constable and others (‘why on earth would he do that?’), only to show the ‘method in the madness’ by returning to the canvas and, with a smudge of his cloth and a gouge of his thumbnail, creating a red buoy.

There is a dazzling recreation of the scene of Turner’s most famous painting, The Fighting Temeraire, and further events that inspire his work – the furious puffing of the new steam engines (Rain, Steam and Speed) and a first-hand account of the cruel treatment meted out to slaves (Slave Ship).

Turner’s scientist friend, Mary Somerville (Lesley Manville) appreciates his genius: ‘the universe is chaotic, Mr Turner, and you make us see it.’ But, as befits an artistic revolutionary, response to his work is polarised. Queen Victoria calls one of his paintings ‘vile, a dirty yellow mess’; John Ruskin, portrayed by Joshua McGuire as a lisping, pompous prig, asks him ‘do you not tire of boats or the fiery firmament?’ (Turner: ‘I do not, sir!’).

After the death of Turner’s beloved ‘Daddy’, he is bereft and becomes increasingly morose and cranky. An enemy of pretension, he communicates in grunts and grumbles. Brilliantly, Spall has created his own back-of-the-throat language. As time goes on his rumbling gets longer, and sounds more and more like a snore. No longer bothering with pleasantries, Turner snores at people. Spall’s performance is often funny, but it is a mark of his skill that he doesn’t turn it into a Dickensian grotesque comedy turn, and capsize the whole film.