In Moonlight, writer-director Barry Jenkins has crafted a sensitive, impressionistic portrait of a gay black man growing up in a tough neighbourhood of Miami. We see Chiron at three crucial stages of his young life, played by three different actors, as he suffers bullying, copes with a crack-addicted mother and tries to make sense of his sexuality. Despite moments of high drama, this is a quiet, slow-burner of a film, with performances, writing and music to match. It is more like Boyhood than The Wire.

Moonlight goes beyond the stereotypes to explore black masculinity and show how hard it is to show softness or be ‘out’ in an often brutal and homophobic world. Jenkins gives us a withdrawn central character who ‘can’t say more than three words at a time’, who gropes his way toward expressing how he feels. This inarticulacy is part of the film’s realism: the constant in-your-face close ups make us read Chiron’s expressions instead of being fed easy words.

Moonlight’s three-part structure, with its on-screen titles and blank ‘curtain’ divisions, betrays its origins as a play, In Moonlight Black Boys Look Blue by Tarell Alvin McCraney. The film opens with schoolkid Chiron (Alex Hibbert), aka ‘Little’, running away from a gang of bullies and seeking refuge in a deserted house, where he is discovered by Juan (Mahershala Ali, Remy in House of Cards). ‘Can’t have you running around these dopeholes’, says Juan, himself a drug dealer. Chiron is mute and wary, but kindly Juan persuades him to go and have something to eat. 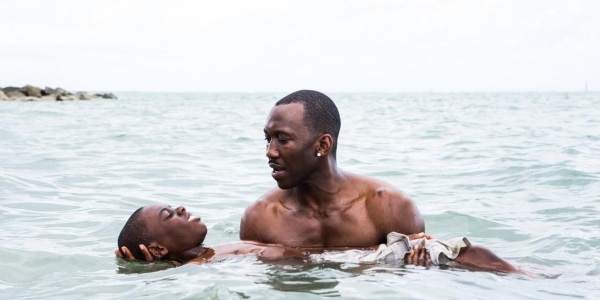 Boy and surrogate father gradually become close as Chiron avoids going home to his junkie single mother (Naomie Harris). Juan teaches him how to swim in the ocean and offers words of wisdom to boost his self-confidence. Chiron wants to know what a ‘faggot’ is because that’s what the other boys call him at school. ‘Faggot is a word used to make gay people feel bad’, explains Juan, telling him that Chiron will ‘just know’ if he is gay himself.

An outsider at school, Chiron slopes away from the rough and tumble of team sports, and anxiously avoids the attention of a nasty bully. But he has a good friend in Kevin (Jaden Piner), who accepts the way he is and who helps Chiron ‘show these niggers you ain’t soft’.

In Part ii teenage Chiron (now played by Ashton Sanders) is still struggling at school and his mom’s health has deteriorated through her drug addiction. He finds some relief and tenderness by the ocean, but violence soon intrudes.

By Part iii, ten years later, Chiron (Trevante Rhodes) has transformed himself into a muscle-bound gangsta in Atlanta, with gun, bling and black stocking hat, modelling himself on his old mentor, Juan. In an affecting finale, Chiron and Kevin are eventually reunited at the diner where Kevin is now a cook, and scarcely recognises his old friend. ‘Who is you, man?’, he asks, trying to break through the macho armour. 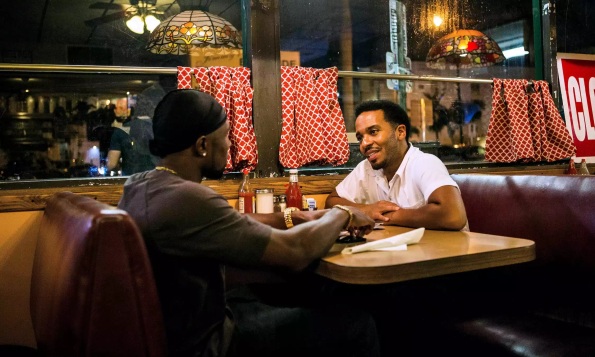 Moonlight has had critical acclaim heaped upon it; it has won a Golden Globe for Best Motion Picture – Drama, and been nominated for 8 Oscars. In light of this, viewers should try to keep an open mind and avoid sky-high expectations. They always lead to disappointment.