This critically-acclaimed Columbian war drama about a guerrilla band of teenage soldiers fighting for survival has echoes of Lord of the Flies, Apocalypse Now and Deliverance. But Monos (‘Monkeys’ in Spanish) has its own unique atmosphere and style, one created in large part by its outstanding cinematography and score, but also by a welcome shift of gears half-way through in which campfire surrealism is replaced by primal Rambo-esque jungle action. 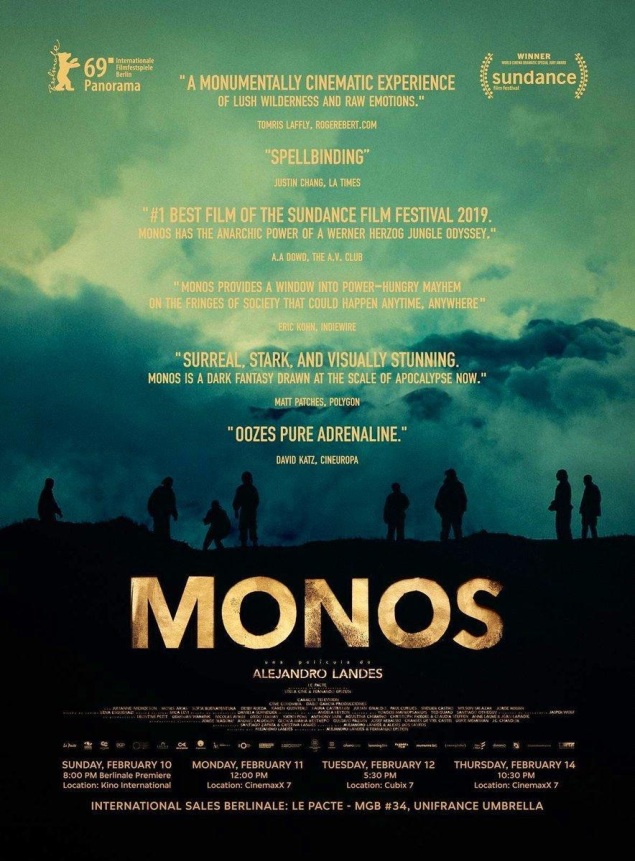 Director Alejandro Landes’ film opens with a dark screen and we hear a scuffling sort of tinkling sound, difficult to make sense of. Eventually we see a group of blindfolded kids playing football with a homemade ball with a bell attached to it. They are on a mountain-top above the clouds, as if they were in a Caspar David Friedrich painting. But their home is weirdly unnatural – a flattened plateau with concrete bunkers. 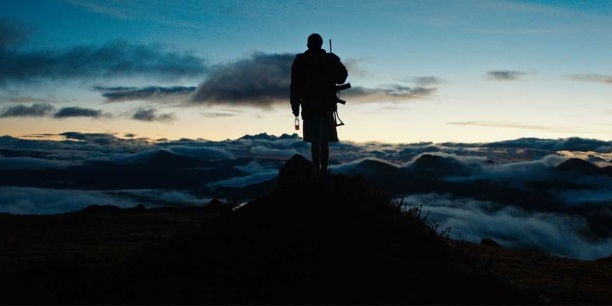 Why are they here? And what are they doing? Bits of the puzzle are gradually explained but the whole situation remains mysterious. The teenagers are called ‘The Monos’ by The Messenger, a sergeant-major dwarf who trains them. The kids go by nicknames like Smurf, Bigfoot, Lady, Boom-Boom and Rambo. They work for ‘The Organisation’, entrusted with guarding a prisoner-of-war (Julianne Nicholson) and a cow named Shakira. 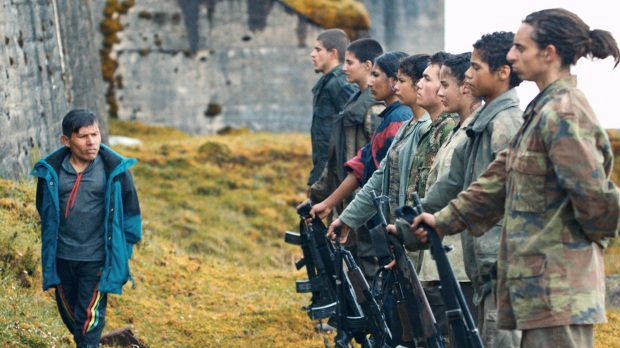 The Monos have their own rules and rituals, such as taking it in turns to beat someone with a belt on their birthday. They also have their own automatic rifles, which look huge next to them, and sound deafening when they go off. The different personalities jostle for position in the group and sexual passions cause rifts and resentments. Sensitive Rambo (Sofia Buenaventura) increasingly feels like an outsider amongst the more macho types such as Bigfoot (Moises Arias) and Dog (Paul Cubides).

When things fall apart the Columbian jungle beckons. Monos then becomes a thrilling chase movie, a white-knuckle ride into the heart of darkness with a superbly vivid natural backdrop. Composer Mica Levi’s score, which had been a minimalistic breathy panpipe riff, becomes more explosive, with sonic booms and phased electronic ‘whap-whaps’ to evoke whirring helicopter blades.

Amidst the action there are stunning images of nature: mist on the mountains; an aerial shot of a torrential river running brown as mudslides join it; underwater bubbles in raging rapids and the luminous greens of the jungle as rain cascades down.

Glimpses of civilization and normal family life feel like a relief and nearly succeed in bringing a smile to Rambo’s face. It is a shock to rejoin ‘real life’ after so long with the renegades. In a surreally funny scene, we get to watch a snatch of TV about the German city Bonn, famous as ‘the home of Gummy Bears’, with film of factory conveyor-belts of bear-shaped sweets.

Monos is a plea to safeguard Columbia’s children and natural resources, but as its cryptic ending shows, Landes and co-writer Alexis Dos Santos do not have the answers, only more questions about how to keep children safe in a dangerous society that is stealing their childhoods and threatening their future (a newspaper headline reads: DEFORESTACION). These monkeys need looking after, not brutalized. 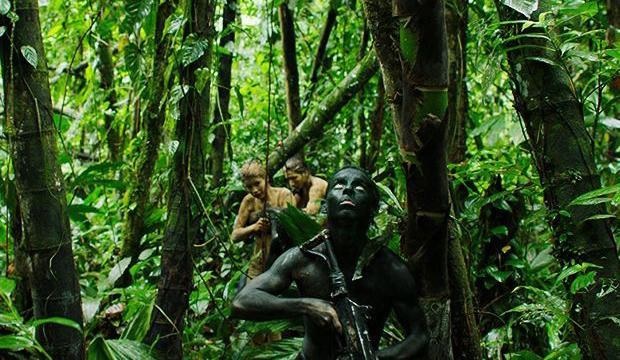