David Fincher’s Gone Girl is a riveting mystery thriller as well as a sharp satire on marriage and media manipulation. With its terrific script (by Gillian Flynn, based on her own 2012 novel), flawless acting, assured direction and atmospheric music, Gone Girl is one of the best films of the year.

Half way through there is a jaw-dropping revelation, after which the plot twists and turns in alarming fashion. By the end we feel dizzy, punch-drunk and bewildered, like main character Nick (Ben Affleck). But we also feel dazzled and sated by two and a half hours of bravura film-making. 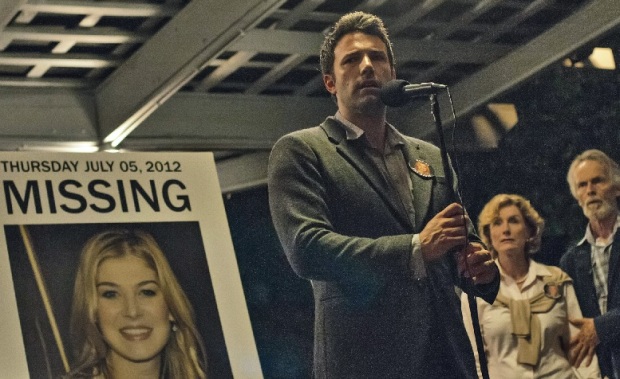 On the morning of her fifth wedding anniversary Amy Dunne (Rosamund Pike) disappears in suspicious circumstances. Husband Nick (Ben Affleck) soon becomes the prime suspect: their marriage has become toxic and the evidence quickly stacks up against him. Laidback and likeable, he is unprepared for the media circus that descends on his Missouri hometown. Unschooled in PR, he gives a ‘pie-eating grin’ for the cameras at a press conference, and is later ambushed by an unscrupulous woman who takes a smiley selfie with him. These photos damn him as ‘guilty’ and uncaring in the eyes of the viewing public.

Gone Girl concentrates on the days following Amy’s disappearance. The audience is given timeline titles to help them follow events: July 5 – The Morning of; July 7  – Two Days Gone etc. Current action involving Nick alternates with Amy’s point of view, in the form of a written diary, which tells the story of their marriage in flashback. We witness their meeting at a literary party, a romantic kiss outside a New York bakery, sex in the Jane Austen section of the university library. Only after they both lose their writing jobs in the recession does the relationship begin to sour. 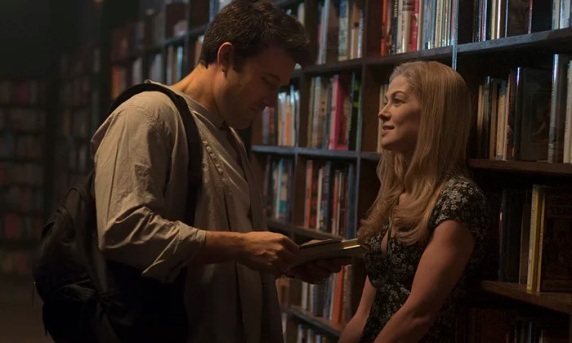 According to Amy’s diary, Nick’s ‘salt-of-the-earth’ mask slips, and he shows himself capable of violence towards her. She wants a baby, but he doesn’t. ‘Nick wants me gone,’ she writes, ‘but he won’t divorce me. I own his bar.’ She owns the deeds to his business, their house and everything else – another source of frustration for him. When the police find her partially-burnt diary, its final entry reads: ‘This man of mine may kill me’.

At its heart, Gone Girl is concerned with manipulation and duplicity – how we try to control and fool others, whether our partners or our mediated audience. Ex-journalist Flynn is well-versed in the cynicism of her old trade, and her two main characters are also writers. With the odds stacked against him, Nick only turns things around when he plays the media game, and becomes more cynical and manipulative himself. He plays with audience expectations in the same way as Flynn and Fincher play with ours.

As a marriage satire, the film lays bare the various roles we adopt, how we try to change ourselves in order to satisfy our partner’s idealised view of us. Gone Girl starts with Ben Affleck’s voiceover, as he asks the ‘primal’ questions of any marriage: ‘What are you thinking? How are you feeling? What have we done to each other?’ Later, he tells his wife ‘we resent each other, try to control each other and cause each other pain’.