Stan wobbled up the stepladder. His hand trembled as he slotted the last DVD onto the new shelf he had just attached to the living room wall.

His wife Lisa watched from the sofa and nudged their two sons, Billy and James. “Take a photo, boys. A miracle has occurred. Your father has done some DIY.”

Stan climbed down to survey his handiwork.

“Now that,” he declared, “is craftmanship.”

The shelf gave a squeak. Then one end lurched down and smacked Stan on the forehead. Volumes 2 – 20 of the Laurel & Hardy Collection cascaded onto the carpet. When Stan tried to put the shelf back up again, Volume 1 slid down and hit him in the eye.

“Stanley Higginbotham,” said Lisa in a world-weary voice, “What are you like?”

“He’s a joke,” said Lisa. “The house might be splitting its sides, but I’m not laughing.”

“I’ll fix it, love. Just give me a little more time. After tonight I’ll be …”

“… a comedy superstar. I know, Stan. You keep on telling me.”

That night Stan was doing his stand-up routine at the local club. Lisa had to admire his persistence. He’d ‘died’ so many times on that stage – any normal person would have given up by now. But like a zombie, he kept coming back for more.

“When I’ve finished with that audience, they’ll be wetting themselves,” grinned Stan.

“And so will we,” deadpanned Lisa, “if someone doesn’t mend the toilet.”

“I’m sick and tired of nagging you, Stan. It’s lovely you’ve still got your dreams, but dreams won’t buy us a three-bedroom house. In case you hadn’t noticed, Billy and James are still sharing a room.”

“We’ll find a way,” said Stan, winking at his sons. “Didn’t you know I was a magician?”

“Which one?” asked Lisa, “Harry Potter or Tommy Cooper?”

There were a few scattered groups sitting at tables in Cinderellas, but Lisa was still waiting for her friend Tracey to show up. She knocked back a gin and tonic and ordered another. The kids were staying at her mum’s for the night, so she could get a bit merry, for a change.

The MC on the mike had a bad cold. “It’s Sadder day night,” he croaked. “See if you lot can cheer me up. Ladies and gentlemen, put your hands together for Trevor Pratt”

Someone cackled like a witch as a hyperactive man started leaping about the stage.

Lisa tried Tracey’s mobile but got no reply. Maybe she’d had a row with her husband. He was a builder – a bit of a cowboy, apparently – and he kept sloping off to ‘work’ at odd times of the night.

At least Lisa could rely on her own husband to be useless in his own home.

The place was starting to fill up now. Lisa amused herself by heckling the acts, doing silly voices. Once upon a time, her English teacher had encouraged her to audition for Drama School. But then she’d met Stan and kissed her dreams goodbye.

Here he was now, up on stage, making the microphone squeal with feedback.

Lisa laughed, but nobody else did. After a few minutes of being ignored by people chatting and drinking, Stan began to dry up. She couldn’t bear to watch. His face tightened into a rictus grin and he choked on his jokes before their punch-lines.

Lisa decided to save him. She stood up, pretending to be more drunk than she felt. “Get off!” she shouted. “You’re rubbish!”

Stan frowned. “You have a go, then. See how funny you are.”

“Okay,” said Lisa, pushing her way to the stage. “That’s my husband,” she explained to the audience. “Don’t blame you for ignoring him. He is pretty useless.” She was on the stage now, looming over the microphone. “Tell them about your DIY skills, Stan.”

Stan’s face wrinkled into grumpiness. “I’m a craftsman,” he grunted. “I take my time. No quick fixes.”

“You can say that again,” said Lisa, raising her eyebrows.

For the next fifteen minutes, Lisa bickered with Stan. By the time they were trading good-natured insults, the men in the audience were cheering Stan, while the women whooped at Lisa’s one-liners.

When a woman got up on stage, the crowd thought it was part of the act. “What was my husband doing at your house?” she demanded angrily.

“Tracey!” Lisa backed away from her friend, “You’ve missed all the fun.”

“Is that the ‘fun’ you’ve been having with my Roy?” Tracey swung her handbag at Lisa’s head. She ducked and it hit Stan on the nose. The crowd erupted with laughter as Tracey chased Lisa around the stage.

“I can explain,” whimpered Stan.

At the end of the evening the three of them walked home together. Stan told Tracey how he had arranged for her husband to do a few jobs in their house. “I gave him a key. It seemed like a good idea, while everyone was out. I wanted it to be a nice surprise for Lisa.”

“You can’t really blame me for being suspicious,” said Tracey. “First I see his van parked outside your house. Then, when I ring on the doorbell, the lights go off.”

Lisa hardly took in what her friend was saying. She was still buzzing from the gig. The MC had said Lisa and Stan were the funniest double-act he’d seen all year. Did they have an agent?

Stan grumbled about Lisa embarrassing him and stealing his limelight. But when the MC mentioned how much money they might make in future, his eyes lit up.

Just as they got home, a van sped around the corner, tyres screeching. Before it disappeared, Lisa read the name printed on its side in Wild West letters: Roy Rogers, Builder and Plumber.

When they got inside, Stan’s new shelf was magically horizontal on the living room wall. Upstairs, the toilet had a new seat and Lisa was delighted that it now flushed properly first time. But the boys’ bedroom came as a shock. A flimsy wooden wall had been erected, dividing the room into two. It had a door-sized hole in the middle, and each part had a single bunk bed.

“Hey presto!” said Stan. “A three-bedroom house. I told you I was a magician, love.”

“You missed out the us, love. Genius. You and me together.” 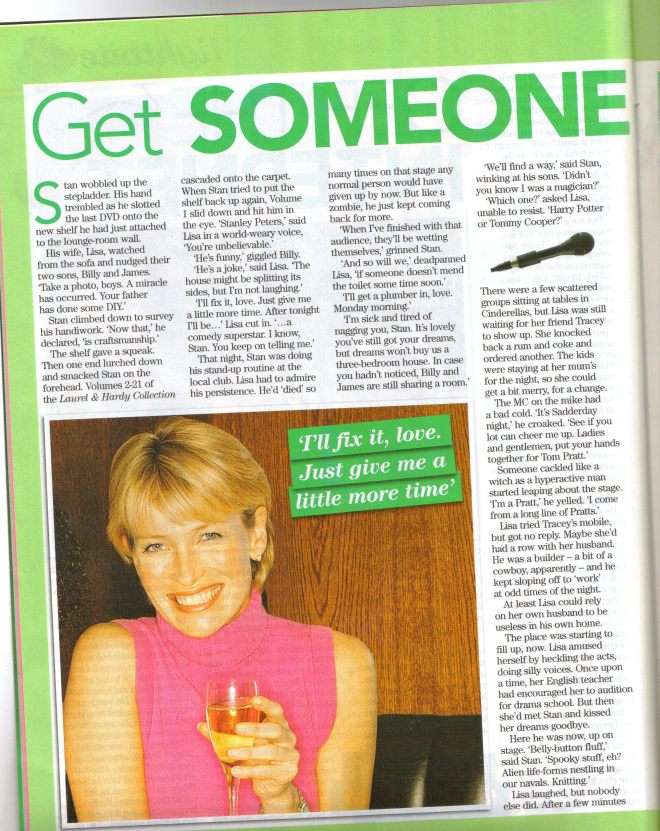