Strong lead performances, a quality soundtrack and exquisite period detail and costumes make up for a lack of pace and dramatic tension in this love-at-first-sight romantic drama. Carol is a dreamy and stylish way to spend two hours during the run-up to Christmas.

Cate Blanchett is attracting rave reviews for her role as Carol Aird, a rich society New Yorker, who falls for Therese (Rooney Mara), a shopgirl working in the toy department of Frankenberg’s in Manhattan. Blanchett is cool and self-possessed in her furs, 1950s shades and tailored suits, but I kept thinking that she looked like Ian McKellen in drag, which rather broke the spell.

Mara enjoys more screen time than her co-star, so the film could equally be named ‘Therese’. She has the elfin, gamine charm of Audrey Hepburn and looks adorable in her duffle coat, succession of chic hats, and polka dot pyjamas. An aspiring photographer who ‘says yes to everything’, Therese is a more engaging and likeable character than her older and more worldly-wise lover, who wafts around her high-class milieu with practised elegance, but who sacrifices her family for love. 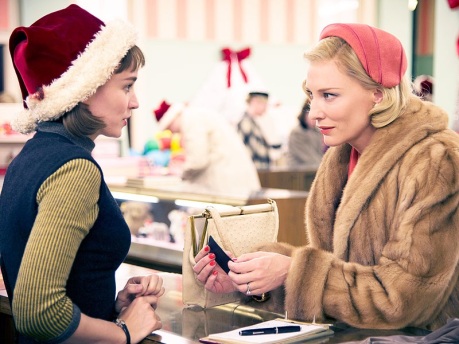 Carol is based on The Price of Salt (1952), the Patricia Highsmith novel published under a pseudonym because of its controversial (at the time) lesbian subject matter.

The film’s slow-burn romance is given more urgency by its risqué nature and the male opposition it encounters on both sides. When Carol’s husband Harge (Kyle Chandler) threatens to take sole custody of their four year-old daughter, his lawyer cites a morality clause – ‘a pattern of behaviour’ – provoking Blanchett’s most impassioned acting in defence of her rights as a mother: ‘there’s nothing moral about keeping Rindy from me’. She later does her best to avoid an ugly court case because ‘we’re not ugly people.’

For a while we enter thriller territory, with a concealed revolver and a private investigator, but there is not much here to quicken the pulse, beyond the one tasteful sex scene. Instead, expensive perfume is applied ‘to pulse points’ as the two women enjoy each other’s company, and we are encouraged to luxuriate in the film’s exquisite surfaces and attention to period detail.

President Eisenhower’s ‘mid-century’ television broadcast pinpoints the year to 1950 and New York in the snow looks wonderful seen through the windows of Carol’s gleaming gold Packard, with its leather seats and gorgeous steering wheel. The film’s skyscrapers, pre-ring-pull cans of Schlitz beer, record shops selling the new 12” by Teddy Wilson/Billie Holiday and immaculate clothes – all hark back to a postwar golden age, the beginning of the Mad Men era.

One exterior shot of a party viewed through a brownstone window, piano tinkling in the background, evoked Hitchcock’s masterpiece Rear Window (1954). The great director also brought to the screen another Patricia Highsmith novel, Strangers on a Train (1951). Carol shares with these films an excellent soundtrack, with veteran film composer Carter Burwell supplying a warm signature refrain. Burwell is a long-time Coen Brothers collaborator and has written the scores to films such as In Bruges and this year’s Mr Holmes.