Award-winning hip-hop artist Akala electrified an audience of all ages with his rap performance of ‘Comedy Tragedy History’, a song that crams 25 Shakespeare play titles and 16 allusions to his work into a couple of quick-fire minutes. This was one of the highlights of an inspirational appearance at the Cambridge Literary Festival, in which Akala showed how much Shakespeare and hip-hop have in common. By the end he had everyone rapping ‘Shall I compare thee to a summer’s day?’

A lithe dreadlocked figure in white t-shirt and black jogging bottoms, Akala has the eloquence of an orator, the charisma of a natural performer and the poise of a Buddhist prizefighter. It is easy to see how this multi-talented young man has rubbed shoulders with the likes of Jay Z and Sir Ian McKellen and attracted worldwide attention for the Hip-hop Shakespeare Company, the music theatre production company he founded in 2009, which aims to explore the social, cultural and linguistic parallels between the work of William Shakespeare and that of modern-day hip-hop artists.

Akala’s favourite rap group are Wu-Tang Clan, who put words like ‘cometh’ into their songs, embraced larger-than-life language and united people who didn’t even like rap. He starts off with a quiz: rap or Shakespeare? He shows the audience a phrase or couplet and asks us whether it is written by ‘a multi-million selling 1990s rap act’ or by the bard himself? Not as easy as it sounds: 70% thought that ‘I am reckless what I do to spite the world’ (Macbeth) was by a rap act; many thought ‘Sleep is the cousin of death’ (Nas) was a line from Shakespeare.

This blurring of cultural lines helps break down the barriers that prevent many from engaging with ‘highbrow’ culture. One of the aims of the Hip-hop Shakespeare Company is to get young people to think about language in popular culture. Akala asks ‘what percentage of Shakespeare’s words are no longer in use today?’ Perhaps surprisingly, only 5%. His mission is to challenge our approach to language, to overcome linguistic prejudice, particularly regarding rap. 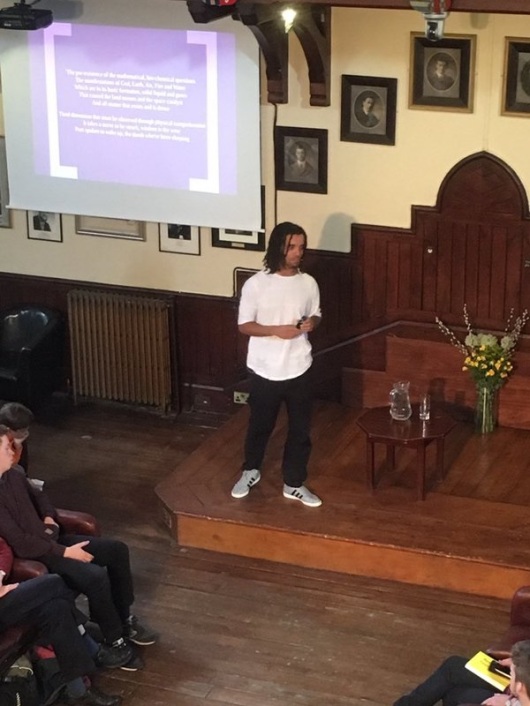 Hip-hop is nothing new. ‘Rhythmical rhyming over the beat of a drum’ has been around for hundreds, if not thousands, of years. He cites a barber shop quartet song from 1936, which sounds very much like modern rapping – search for Golden Gate Quartet: Preacher and the Bear on YouTube and you can hear it. In the Comments section you will also notice a few ‘Akala sent me here’ entries.

Akala tries to highlight Shakespeare’s musicality and rhythm, getting us to clap out a rhythm, then recite lines from Shakepeare’s Sonnet 18 over the top. He thinks the English reverence for the Bard’s work — the idea that there is a ‘proper’ way of doing Shakespeare — paralyses people from being creative. He points out that the playwright himself was constantly rewriting other people’s stories.

England was ‘an incredibly poor, mad place in Shakespeare’s time’. 92% of his audience were illiterate, but they still found him entertaining. The prim, proper revisionism of those who sanitise his work and say things like he is ‘not for people like you’ have put a lot of people off. In countries like Kenya and Zimbabwe communities are torn between ‘hating the stuff that is foisted upon them’ and ‘liking the guy’.

After reading an extract from his published graphic novel/poem, The Ruins of Empire, and performing ‘Comedy Tragedy History’, Akala answered questions from the Cambridge Union audience. We learned that he used to play for West Ham Youth team, that he started rapping aged 6 or 7, that his step-dad was stage manager of the Hackney Empire in London, so ‘theatre was a safe space for me’ – he worked there doing the lights. He took his GCSEs when Baz Lurmann’s film Romeo+Juliet came out, ‘which made Shakespeare exciting for young people, especially those put off by the sanitised version’.

What was his favourite, rap or Shakespeare? ‘I love writing. Full-stop.’ Rap wasn’t really his favourite music, he preferred 1970s reggae.

Who inspired him to rap? ‘My dad and the toasters at the time. He also played Public Enemy’s Fear of a Black Planet to death.’ Akala was drawn to their political lyrics and critique of society. Another big influence was seeing rapper KRS1, who went on to teach philosophy at Yale University, give a lecture at the Hackney Empire – ‘a rapper lecturing about history’.

What did he think other cultures could bring when doing Shakespeare? ‘Inventiveness, playfulness, a cultural ingredient.’ The South Sudan Theatre Company, for example, showed by their form and movement that they were different. Akala said that ‘cultural arrogance is not useful’ because ‘Shakespeare’s work stands on its own merits. It is always about that blend of cultures’.