Last week a group of us from ProQuest used one of our Volunteer Days to help the rangers with conservation tasks at nearby Wandlebury Country Park. We have been coming here for a few years now and it is always a welcome change from the workaday grind of computer screens and meeting rooms. Fresh air and exercise! Getting back to nature! Getting bitten by annoying gnats …

This time we joined members of the public in removing unwanted ash and sycamore trees. Some of these showed signs of the dreaded ash dieback disease (blackened buds); others had been planted too close to one another, blocking the light and preventing more biodiversity at ground level.

We also did a bit of coppicing of hazel and lime trees. According to the noticeboard, “Coppicing is a type of woodland management practised in Britain for centuries, and is a sustainable way of harvesting wood without harming the tree. By cutting close to the base of the tree, leaving ‘stools’, it will encourage regeneration and sprout a number of fast-growing shoots.” 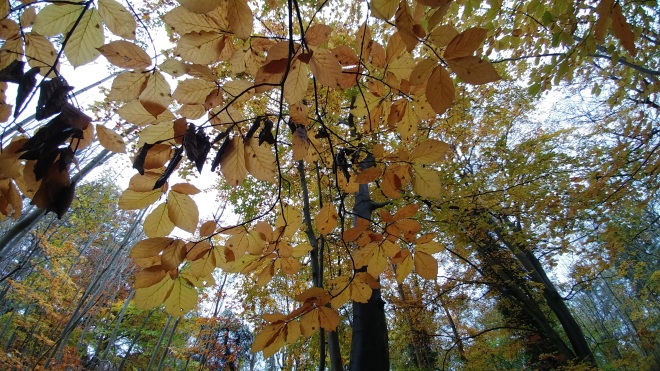 The increased light created by coppicing aids the growth of new flora, which attracts insects and birds. To illustrate this, ranger Andy asked us to listen. Silence. No birdsong or birdcalls. He explained that this habitat offered no cover for smaller birds, who were easy prey for the native sparrowhawks. The only bird sounds we heard all day were the high-pitched ‘sss, sss, sss’ of a flock of long-tailed tits.

And the only wildlife we saw were clouds of gnats, brought out by the mild November weather. Getting bitten on the eyelid got Andy onto the subject of insect bites. Horsefly bites were bad, he conceded, but the worst were the burrowing and parasitic bot files that made cows buck with pain.

Visits to Wandlebury are always educational when the rangers are on hand. We were shown a ‘bonsai’ beech tree that was 80 years old. We learned that female sparrowhawks are bolder than their male counterparts, that thrushes mimic other birdcalls and car alarms, and that tractors are computerised nowadays. Ranger Ed said the old days were more fun, when you tied rope around the steering wheel and jumped off and on again.