Free Fire is essentially one long shootout in a disused warehouse. It shouldn’t really work, but maverick English director Ben Wheatley’s action comedy is a riotously funny and technically bold piece of work, full of cartoon violence, rapid-fire insults and playground silliness. Those seeking character depth and gravitas will hate it, but this stand-off between two motley crews in 1970s Boston is best enjoyed as a kind of live-action animation, like Tom & Jerry meets Reservoir Dogs.

After cult hits Kill List (2011), Sightseers (2012), psychedelic Civil War drama A Field in England (2013) and last year’s disappointing High Rise, Wheatley is still gleefully pushing the envelope, hopping genres and avoiding the mainstream. Free Fire is his most accessible film to date, dumb fun that will reach a wider audience and put him on Hollywood’s radar. But this uncompromising director is likely to resist the lure of big bucks. Teamed up with screenwriter/editor wife Amy Jump, Wheatley remains a fiercely independent visionary who insists on the final cut.

In 1978 Boston a van of criminals led by Irish Frank (Michael Smiley) and Chris (Cillian Murphy), with a suitcase full of cash, makes its way to a warehouse rendezvous, where they attempt do business with a gang of oddball gun-runners. After a disagreement between two opposing young characters – Bang! All hell breaks loose.

Soon they are all shooting at each other or taking cover, crawling around the debris-strewn floor of the warehouse and making a mess. If this was a Hollywood action movie, it would be over in a few minutes, but these guys are terrible shots. When people do get hit, it is mostly in the arm, leg or a shoulder. So the ear-splitting shooting goes on … and on. It’s ridiculous and very funny. 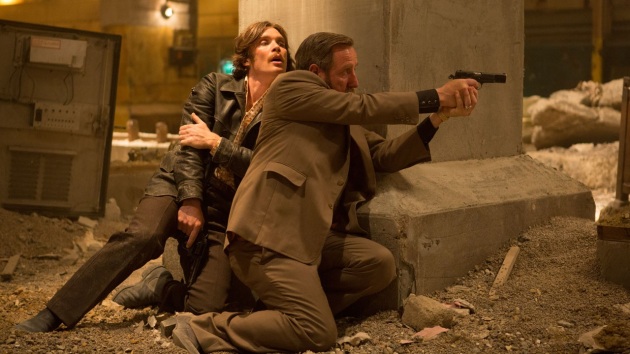 In such a set-up, without flashbacks, there is no room for character development. Alliances shift, and there is a brief possibility of romance between Chris and the only female member of the ensemble cast, Justine (Brie Larson), but these are cardboard cut-outs with paper plane lapels, mostly trading school playground insults and unpleasantries. Free Fire even has a tickling scene and a kind of register-taking: ‘you still alive?’ asks someone. ‘Here’, comes the reply. Any feelings of sympathy we might have for the colourful ensemble cast are put in their place by Frank, who says ‘sympathy is in the dictionary, between shit and syphillis.’

Sharlto Copley steals the show as Vern, a South African idiot, who has the funniest accent and the best lines. ‘No, it doesn’t hurt,’ he tells Justine, after he is shot, ‘I’m from Africa’. ‘Are all the people in your country like you?’ she asks him. ‘Vern is a rare, mysterious jewel,’ he replies.

The Seventies setting allows Wheatley and his team to have fun with clothes, hairstyles and political incorrectness (‘the fag and the retard are an interesting choice of muscle to bring to the party’); it also provides some great music. Free Fire opens with the propulsive Do the Boob, a song by The Real Kids, a lesser-known power-pop band from Boston, which encapsulates what the film is all about.

John Denver’s evergreen Annie’s Song will now have a dark side after it is used to accompany the most grisly action, in much the same way as Stuck in the Middle with You will forever be associated with the torture scene in Reservoir Dogs.